It’s 6.45am and I’m standing at the base of Le Morne Brabant, one of the most eye-catching peaks on the beautiful island of Mauritius. As I gaze up at the sheer walls of rock rising above the surrounding lush forest, I begin to wonder why I’m not still fast asleep in my luxury hotel room. This is a holiday after all! But ever since my previous visit to Mauritius, Le Morne has had a pull on me that I can’t ignore and I feel compelled to hike to the top and marvel at the views that I know are going to blow me away.

I’m walking with one of only two or three guides who are permitted to take hikers into the private land surrounding the mountain and onto the mountain itself. My guide, Allan, grew up in Le Morne village and his family still live in the region, with his brother, Christophe, part of Allan’s team. The brothers are proud Mauritians who have a healthy respect and love for the island they are lucky enough to call home. Christophe tells me he has never left the island and has no desire to travel: “why would I want to leave such a beautiful place?” I have to say I can understand his way of thinking. Mauritius is magical, and not just because of the white-sand beaches, the turquoise lagoons and the swaying palms that ring the island. There’s also the lush, mountainous interior filled with waterfalls, sugar plantations, monkeys and verdant forests, as well as friendly locals and a rich and fascinating culture. 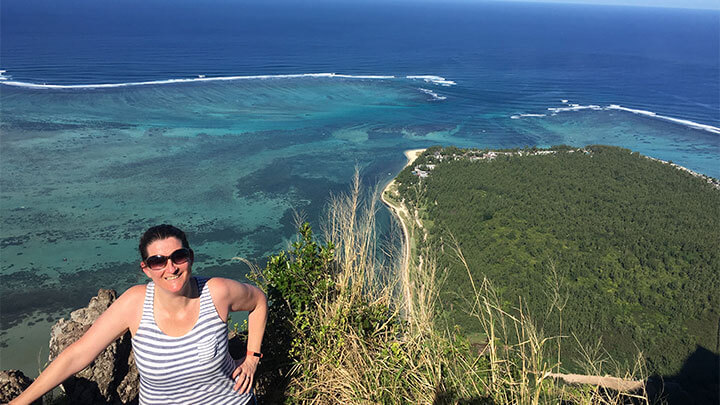 The mountain, fondly known as ‘Madame’ by those who know her best, is so much more than a striking, neck-craning peak. She also has a terrible history that should never be forgotten. In the 18th and early part of the 19th century, slaves escaped from their Dutch, French and British captors and sought refuge in the dense forest surrounding the mountain. For many years, they developed settlements and lived in the mountain’s hidden caves, well away from their inhumane slave existence. In 1835, the Abolition of Slavery Act was passed and a British team of soldiers and policemen were sent to announce to the island’s slaves they were free. Tragically, as the slaves saw them approaching, they assumed the worst and, to avoid recapture, many of them jumped to their deaths. Le Morne (morne means sadness) has become known as a symbol for the fight for freedom, and there’s a Slave Route Monument at its base. 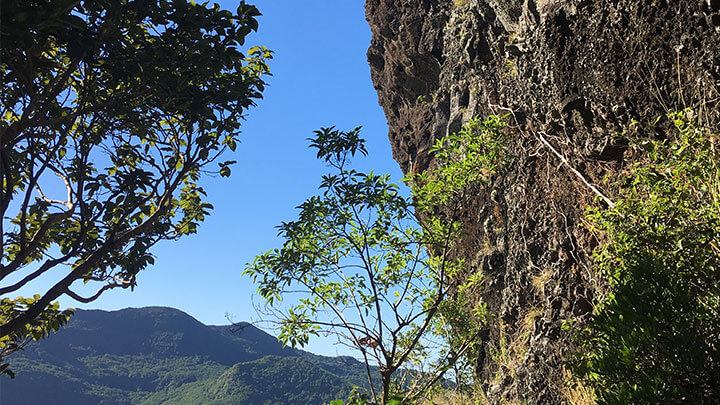 An early start is necessary to avoid the heat of the day, and the first half of the 515m hike along the Slave Route is a pleasant, steady climb along a woodland path, sheltered from the hot sun – the occasional viewpoint allows you the perfect excuse to pause, catch your breath and gaze at the sparkling blue water below. As we walk, Allan tells us about the history and legends of the mountain – his grandfather was a shaman here – and we learn about medicinal plants along the way, many of which are still used today.
Only a reasonable level of fitness is required to reach Le Morne’s summit, but the next stage of the hike requires a very healthy dose of grit, determination and a head for heights. In some places, the path appears to be almost vertical – with a particularly hair-raising 60-metre stretch – but even as a novice hiker with no climbing experience, I thoroughly enjoyed the challenge! It’s hot work in the tropical heat, but every step is worth the effort when you reach the summit and stand beneath the Cross of Slaves (Allan’s family helped to haul the huge metal cross up the mountain a number of years ago). After a little rest soaking up the incredible views, it’s time to head back down the way we came. Even more concentration is required as we head down the steep, rocky path but, finally, with legs like jelly, we reach sea level again and my mind turns to a refreshing swim in the resort pool and a well-deserved cold beer! But as I shift back into holiday mode, I reflect on what we learned during the hike and the terrible injustice, fear and hardship endured by the hundreds of slaves who took shelter on the mountain. She is indeed a thing of beauty but also a lasting symbol of fortitude and the fight for freedom. 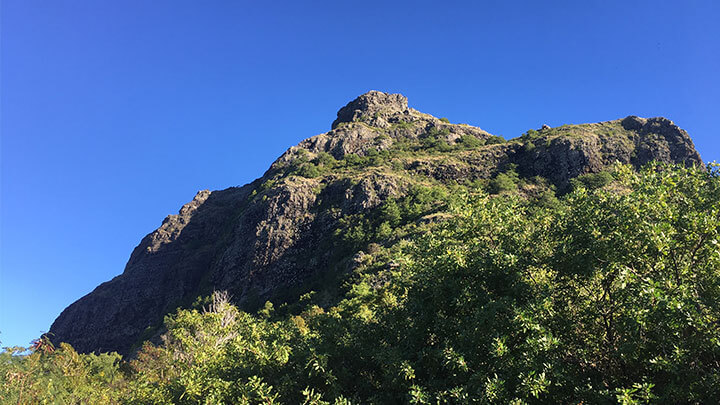 Hike time – approximately four hours, starting around 6.30/7am
Stay – St Regis Mauritius Resort, LUX Le Morne and Heritage Le Telfair are all within easy reach of Le Morne Brabant.
What to pack – walking boots or good trainers, a small rucksack, plenty of water and a snack, a camera/phone, rain jacket (you are in the tropics, after all) and a sense of adventure!

My love of travelling the world began at the age of 8 when I took my first long haul flight to Florida. I loved everything that the Sunshine State had to offer, especially Disney World! Ever since then, the appeal…