From spotting wildlife on a river safari to stepping inside a yawning cave mouth, a honeymoon to the Southeast Asian island of Borneo can be a thrilling recipe for adventure. Fresh from his own Borneo honeymoon, editorial executive Rhodri Andrews shares his top experiences for adding a splash of adventure to your romantic getaway…

These lovable apes are one of the main draws to Borneo and along with the Indonesian island of Sumatra, it’s the only place they can be found roaming in the wild. Nothing quite prepared me for my first glimpse of a shaggy ginger mass swinging through the canopy in search of food, an orange twinkle among a forest of green. Better still, in the Malaysian slice of Borneo in the north, there are plenty of chances to try and spot them. In the eastern state of Sabah, Sepilok Orangutan Rehabilitation Centre offers a prime opportunity to spot semi-wild orangutans in their natural rainforest habitat, as well as witnessing the work the centre does to reintroduce them back into the wild surroundings – a humbling experience. If you’re based in Kuching in the western Malaysian state of Sarawak another orangutan sanctuary, Semenggoh Nature Reserve, offers another excellent, inspiring alternative and also the chance to see sun bears in the neighbouring conservation centre. If you want to glimpse them totally in the wild, head to Abai Jungle Lodge along the Kinabatangan River for an unforgettable experience. 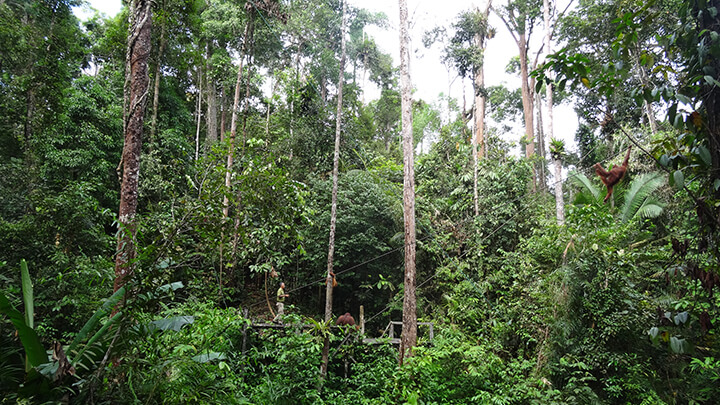 2. Step inside a huge cave

Nudging Brunei in the state of Sarawak, the caves of Gunung Mulu National Park are often missed by travellers visiting Borneo thanks to their remote location. However, these UNESCO-listed wonders are of mind-boggling proportions with each featuring their own unique charm, housing stunning rock formations in Lang’s Cave, an underground river in Clearwater Cave and eye-popping chambers in the Cave of the Winds. However, my star of the show was Deer Cave, the second largest cave system in the world after Hang Son Doong cave in Vietnam. I gasped as I stepped inside its huge, yawning mouth, peering up at the impossibly high cavern ceiling to spy what looked like dark clouds but were in fact three million wrinkle-lipped bats that call the cave home. At dusk you’ll witness a wonderful wildlife spectacle, where the bats stream out of the cave entrance in charcoal-coloured ribbons in search of food. A spectacular sight! 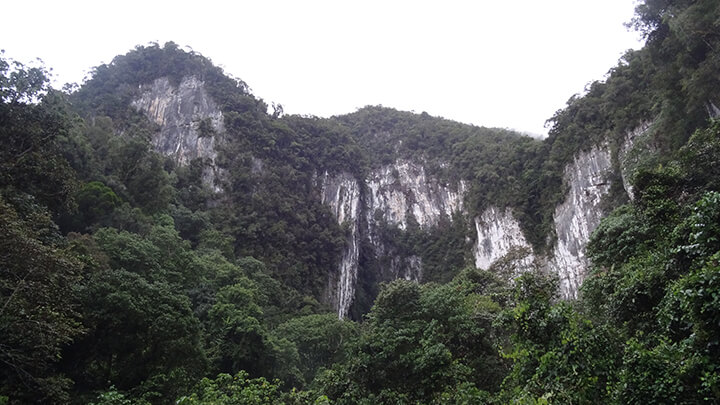 Grab your binoculars! Fording the jungle-flanked Kinabatangan River in search of signs of movement on trips from Abai Jungle Lodge is a classic Bornean wildlife experience. Wild orangutans, proboscis monkeys and long-tailed macaques all call the surrounding rainforest home and scanning the river’s fringes for them is a real thrill, while crocodiles can be spied basking in the sunshine on the riverbanks. Crane your neck skywards for glimpses of birdlife; here, spotting the eight species of hornbill, including the mightily impressive-looking rhinoceros hornbill, can get pretty addictive! 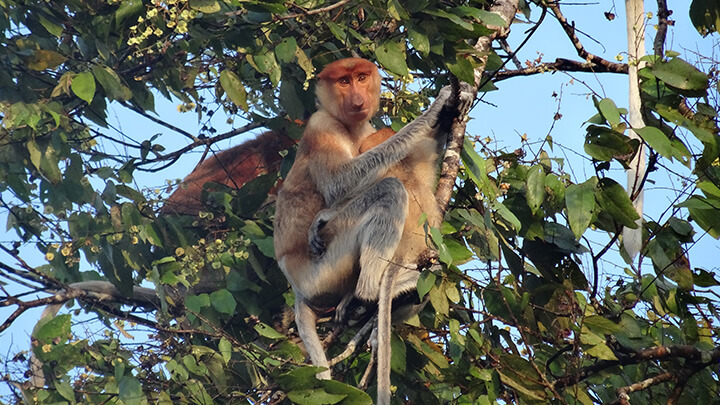 Look to join a safari which stays out on the river once darkness falls. After dusk, you’ll be treated to a fine firefly display, a phenomenon that I can only describe as tens of Christmas trees lined up in a row, all twinkling in unison.

Back at the lodge, boardwalks snake through old-growth forest and towers offer nose-to-beak encounters with birdlife and butterflies floating through the greenery. 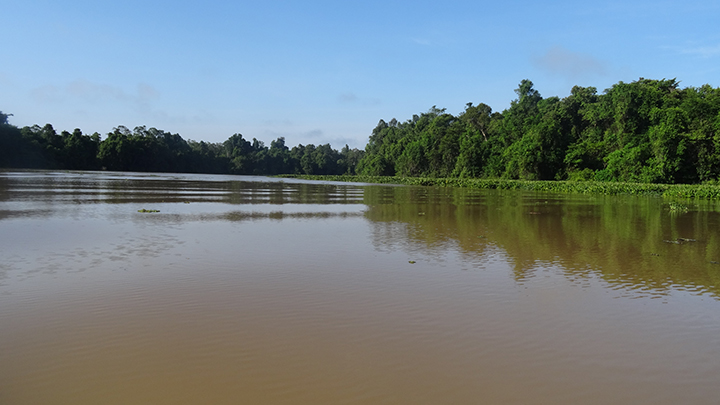 Simply put, there’s no escaping the rainforest on a trip to Borneo! The orangutan sanctuaries in Sabah and Sarawak, jungle in Gunung Mulu and the forest which fringes the Kinabatangan River all give you an epic taste of this amazing ecosystem. But I felt nowhere in Borneo was quite like Bako National Park in the north of Sarawak, close to Kuching. It’s a wild mix of jungle, mangrove forest and rugged sea-carved cliffs – a combination both enthralling and unique. A web of walking trails offer prime access to all of its natural wonders, cutting through ancient rainforest and topping cliffs to gaze down on multi-coloured sea stacks dotting the coastline. Keep an eagle eye out for a trio of monkeys – proboscis, silvered langurs and long-tailed macaques – chattering among the treetops and tame bearded pigs snuffling through the undergrowth.
Bako National Park is perfect for a day trip from Kuching. The journey is as much a part of the adventure, too, with the park only accessible by a boat ride around the peninsula it sits on. 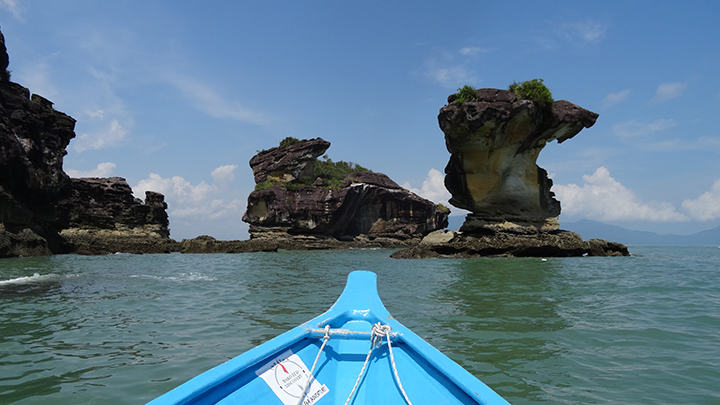 After all that adventure, a break is well deserved to chill out somewhere with postcard-perfect views. I was lucky enough to stay at Gaya Island Resort off the northern Sabah coastline, a secluded island retreat where I could switch off from everything. Here, its villas offer exceptional views of either verdant jungle swathes, mangrove forest or the mist-shrouded peak of Mount Kinabalu on the mainland. You can either take a dip in the hotel’s infinity pool or go for a swim in the limpid-blue waters that lap the beach. 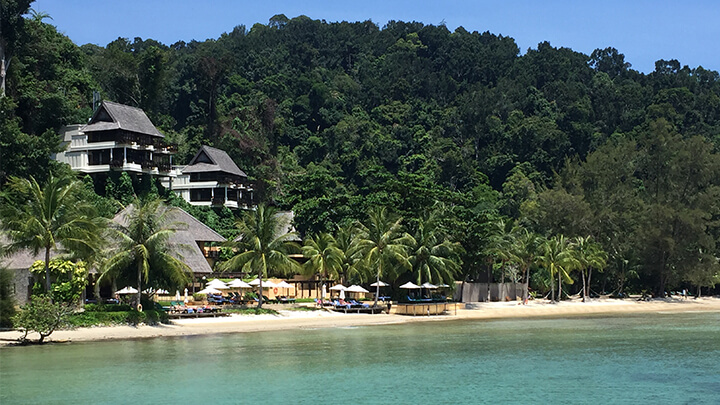 While it’s perfect for relaxing, if you still have itchy feet there’s plenty of experiences on offer. Its coral reefs are perfect for snorkelling among myriad of tropical fish and turtles, while daily expert-led nature walks take you deep into the island’s emerald core. For another alternative on the island, Bunga Raya is another secluded slice of paradise that blurs the boundaries between your jungle-chic accommodation and the natural surroundings.