Wild & Free: At home with the Francombes

Wild & Free: At home with the Francombes

Deep in the heart of northern Kenya’s Laikipia region, Ol Malo lodge offers all those who visit a true home-from-home experience, a legacy of one special family among some of Kenya’s most spectacular wilderness

Gazing out over Kenya’s vast Laikipia Plateau, its acacia-dappled hills melting into the horizon, husband and wife Colin and Rocky Francombe turned to each other and smiled. It was a sight they’d witnessed a thousand times over – but this moment was different. This time, they were presiding over their new land, achieving a long-held dream of owning a piece of Africa. They set to work building their family home, a lodge perched on a rocky escarpment overlooking Laikipia’s majesty. But the Francombes wanted to share this epic wilderness with the world, doubling their retreat as one of the most authentic safari lodges in Africa. They called it Ol Malo.

Ol Malo is a charming sanctuary that serves as an amazing escape from daily life, its clifftop location surrounded by endless semi-arid plains, making it feel utterly remote. Its prime African savannah setting acts as the ideal outpost for tracking wildlife such as giraffes, big cats, elephants and antelopes.

A species of the latter lends its name to the lodge, for Ol Malo means ‘Land of the Greater Kudu’. However, what makes Ol Malo so special is it arguably brings you closer to the people and landscapes of Kenya than anywhere else. That’s all down to the passion and heritage of the Francombe family, with not just Colin and Rocky, but their children Julia, Annie and Andrew, as well as daughter-in-law Chyulu, helping to run not only the lodge but everything that comes with the conservancy.

While Ol Malo lodge was built in 1992, the Francombe family’s story precedes it by over 80 years. Rocky’s grandparents arrived in 1910, her grandmother a pioneer in the coffee farming industry in Kenya, while Colin’s father Aubrey came in 1929 as a pilot. After spending much of his time flying across East Africa, Aubrey probably didn’t realise that one day his career would take a royal twist. 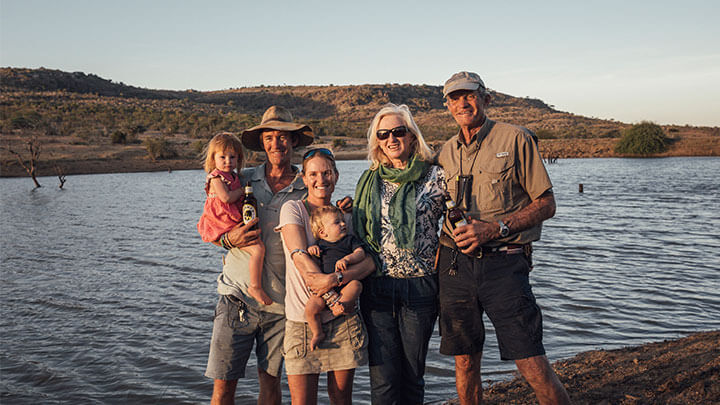 In 1952, he transported his most precious cargo yet: Queen Elizabeth II and Prince Philip. The future Queen was holidaying in Kenya when she learnt of the death of her father, King George VI. Aubrey was enlisted to fly her from Nyeri, in the foothills of Mount Kenya, to Entebbe in Uganda, where she boarded a royal plane back to the UK. He’d written himself into the history books as the first person ever to fly a British Queen.

Aubrey’s love of flying has clearly rubbed off on grandson Andrew, a qualified pilot and someone who has explored all corners of Kenya by air. Helicopter trips are a big part of the Ol Malo experience, too, with Andrew personally flying guests in his Raven R44 around the plateau for sundowners on granite outcrops, bird’s-eye views views of Lake Turkana’s jade waters or breakfasts beside flamingo pools.

Ol Malo has a deeply rooted connection with the Kenyan wilderness and its people, one that was forged long before the first brick was laid. This stems from Colin’s awareness for the environment around him, a passion that was developed and refined after honing his craft at another conservancy. Over the previous quarter of a century, he worked under iconic conservationist Kuki Gallmann at Ol Ari Nyiro Conservancy, a woman fiercely committed to protecting the fragile oasis of biodiversity around her, as well as highlighting the issue of poaching. 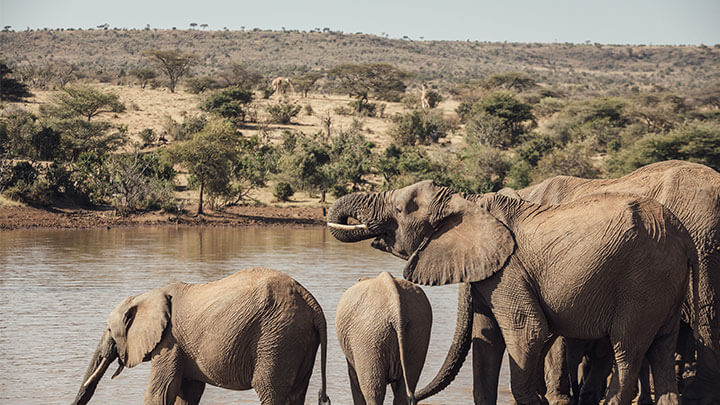 Kuki’s story came to the attention of the wider world after the release of her 1991 memoir I Dreamed Of Africa, which was later turned into a movie in 2000, starring Kim Basinger. Colin became her most trusted assistant, running the conservancy and helping her lead the way in Kenyan conservation. This peaked in 1989, when he assisted in masterminding the complicated construction and burning system of the first-ever ivory bonfire, cremating a huge stockpile worth millions of dollars. This sent a damning statement to poachers and became the catalyst in persuading the world to join forces and try to put an end to the ivory trade.

This ethos is something both Colin and Rocky have made sure is ingrained in day-to-day life at Ol Malo lodge. Right from the beginning, their aim was to rebuild relations with the local Samburu tribe after they had soured with the previous owner of the land. Over the years, the family has worked with the Samburu community to help solve issues such as employment by coming together to build Ol Malo, and the water supply. They also assisted in building a medical clinic. 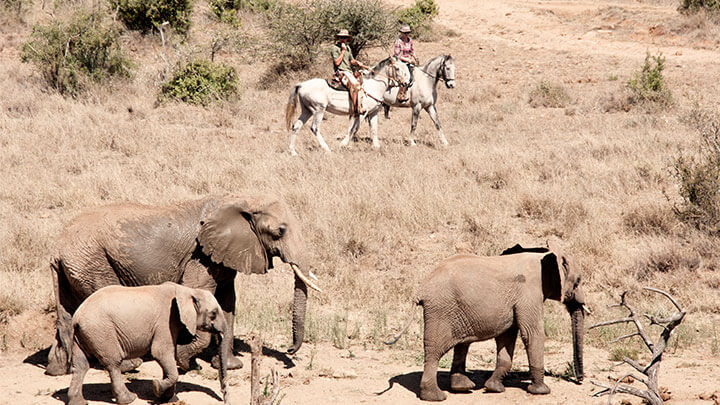 It’s the type of relationship that you’re unlikely to find elsewhere, with the nomadic traits of the tribe among the least understood on the planet. A unique mutual respect developed from the Francombes’ keenness to not only learn and understand the ancient nature of the Laikipia Plateau, but integrate themselves into the Samburu culture, too. It’s a relationship which has blossomed over nearly 30 years and in that time, Colin has become a highly valued elder in the Kimaniki group.

Sharing with the Samburu

Today, everyone who visits Ol Malo lodge can embrace the Samburu culture as well, with tribespeople guiding you on many of the day-to-day activities and game drives. They’ll lead you on nature walks through the breathtaking bush scenery, peeling back the landscape to reveal hidden wildlife, and share with you the medicinal plants they use. You can visit a manyatta (traditional village), too, to gain a rare glimpse into how they live. Unlike some other village visits elsewhere, nothing there is staged, the authenticity of these excursions sealed by the very fact you can only go when you’re invited by the Samburu themselves. 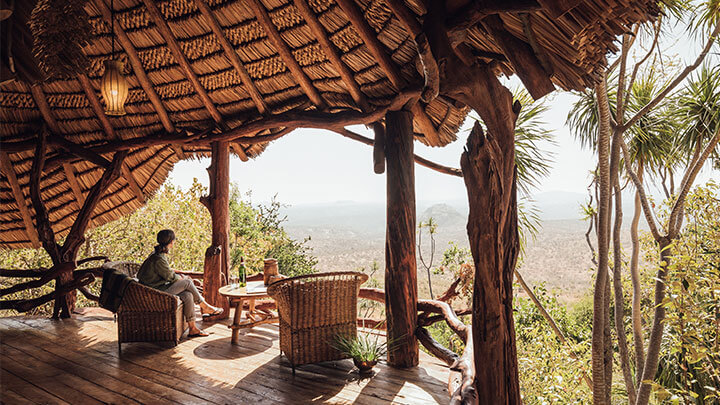 The friendship between the Samburu and the Francombe family developed further in 2000, when Colin and Rocky’s daughter Julia established the Samburu Trust (then the Ol Malo Trust). It was kick-started by a severe drought in the same year, the worst the country had experienced in 37 years. The inaugural ‘Beads for Food’ programme was launched, an arts workshop where married Samburu women (affectionately known as ‘mamas’) could share their ancient bead-making skills with visitors and benefit from a source of income at the same time. It’s a programme that has developed into a regular workshop for visitors to participate in and soak up this fascinating culture.

Since that first programme, the Trust has helped support the community enormously. Over the years, Julia and her team have worked tirelessly to dig reservoirs, educate children in their nomadic way of life and continually treat locals for trachoma, a disease especially prevalent in Laikipia which can lead to blindness. And that’s just the tip of the iceberg. 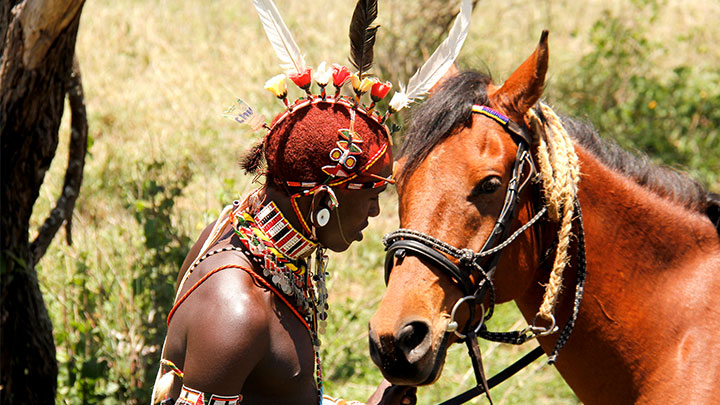 The Trust’s team of Samburu Warrior Scouts have proudly become the guardians of their land. They help protect the wildlife against the threat of poaching, while working closely with the Kenya Wildlife Service and educating other members of their community to respect the animals in an environment that’s been put out of balance by climate change and overpopulation. A unique curriculum developed by the Trust’s Naitengen schools, specifically for the nomadic children, aims to educate these points at a grassroot level and to the future generations of Samburuland, to ensure both their survival and that of the ecosystem to which they’re so closely entwined.

The Samburu Trust will celebrate its 20th anniversary in 2020. It’s a trust that’s been very successful, but one that wouldn’t work without the hands-on approach of the Francombe family and their close relationship with the tribe. 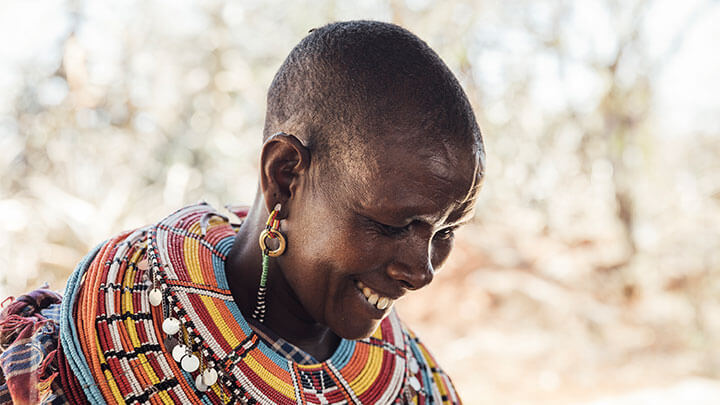 It’s the little things in life

The Francombe family is involved with every facet of Ol Malo, from the experiences and relationships with the Samburu to the nitty gritty, like seeing to simple maintenance jobs and front of house. They make their own spontaneous decisions when it comes to your stay there, too, a choice that’s literally down to the ‘lie of the land’ in Kenya. For example, if they see the river is high one day you could go tubing down it, or if they’re aware of elephants nearby, you might venture out on safari. Even though the lodge has been established for over 25 years, it’s a refreshing approach, especially in Africa where guests often stay at a lodge without ever meeting the owners.

Each member of the family has their own individual passion, effortlessly linked with protecting the fragile landscape around them, the tone set by Colin and Rocky’s love for Laikipia Plateau. Andrew uses his flying expertise to both give guests unforgettable experiences and work closely with the Kenya Wildlife Service, Annie helps to spread the word about Ol Malo’s pioneering conservation and Julia loves promoting the good work of the Samburu Trust. Daughter-in-law Chyulu’s love for horses has meant guests can explore Laikipia’s rocky outcrops and acacia-lined riverbanks on horseback on guided multi-day trips, sleeping under canvas each night. It’s just one of many wild adventures you can enjoy with Ol Malo’s exciting new Nomad safari experiences. 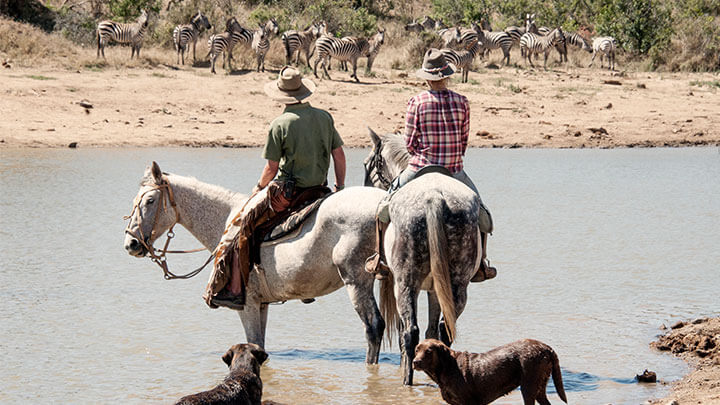 They have such adoration for Kenya, it’s hard not to develop an instant connection with the Francombes. Their infectious charm will permeate every guest, such is their presence around the lodge. As a result, there’s nothing more pleasant than an evening around the dinner table after a day of activities, everyone’s attention captivated by stories from Colin, Andrew or the rest of the family. Though they descend from settlers, they’re fiercely proud Kenyans. They’ve lived through it all: colonial rule, Kenya’s independence, the shifting landscapes and some of the worst droughts on record. These experiences are what make these candlelit tales so enchanting and you can’t help but feel you’re hearing them from those who know Kenya best.

A few words of wisdom Colin stands by are to always appreciate the little things in life – that first glimpse of an elephant, or your inaugural encounter with the Samburu people. It’s a motto he and Rocky certainly remembered to live by back in 1992, as they stood on that rugged escarpment gazing out at the epic beauty of Laikipia. That day, they fell in love with Kenya all over again. 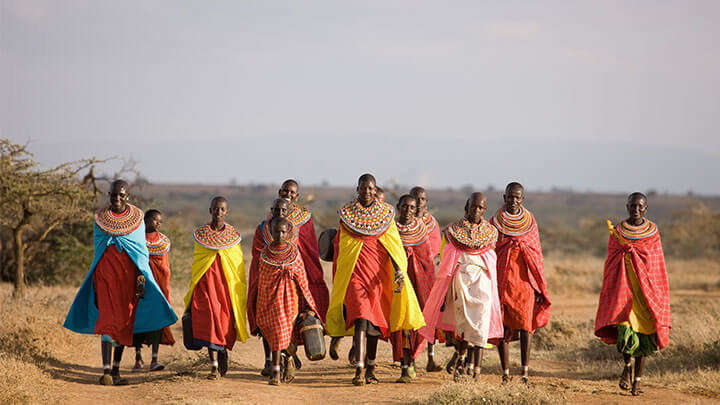